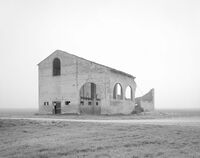 You can accredit yourself for the press preview by sending an informal e-mail message to pr@sk-kultur.de.

The “Tracing Transformations” project presents three positions from three different countries: Laurenz Berges (*1966) from Düsseldorf, Michael Collins (*1961) from London, and Paola De Pietri (*1960) from Reggio Emilia, Italy. Their photographs focus on landscape-related and structural phenomena that they primarily discovered in the vicinity of their studios or their homes and in this respect can be studied over the long term. All three of them attentively observe the meticulous transformation of their environment and use their large-format cameras and therefore the high image quality they achieve to document factual and atmospheric conditions.

The concept of “Tracing Transformations” finds multilayered analogies in the photographs by the three artists. It can refer to weathering, but it can also illustrate a form of intuition and decomposition, dissolution and change. On display are documentary but above all contemplative photographs that deny any premature answers, take the metier to its limits, and challenge our visual curiosity.

The spectrum of motifs in the photographs by Laurenz Berges makes reference to constellations of urban landscapes, to buildings, constructions, and spaces that, used and used up over decades and often abandoned, tell stories about everyday occurrences. His preferred terrain is the Ruhr region, where he finds, for example, simply built townhouses from the postwar period; discovers the avant-corps of a building from the turn of the 20th century that displays a bizarre, apparently useless wooden frame; three bells arranged on a wall that features countless signs of use and whose nameplates are blurred; a plane tree that was planted a long time ago and whose roots have grown under the pavement, raising several stone slabs. Yet no one seems to walk here anymore; the streets that Berges takes pictures of come across as deserted and show no signs of any future modernization.

Michael Collins is presenting a selection of photographs from three different areas of his work. The diptych “Hoo Flats” features landscape views in the estuaries of the Thames and the Medway east of London and constitutes the culmination of the three years he spent working in this area. The artist found an imposing tree in Hampstead Heath in London and photographed it from three different perspectives. The photographer approaches the representational area of the sculptural with the three photographs taken in industrial areas. These images are also historical evidence of spent labor and situative atmospheres. In his oeuvre, Collins reflects on the metaphysical qualities of the medium of photography; he sees photography as equivalent to other artistic media, such as painting.

The buildings and trees Paola De Pietri photographed between 2014 and 2017 are situated in the northern Italian Po Basin in the Emilia Romagna, Lombardy, and Veneto regions. Paola De Pietri”s delicately elaborated black-and-white photographs are characterized by a discretely stringent aesthetic. The motifs are the solitary trees and houses so typical of the region. The spacious character of the fertile basin with its fields and rows is exemplified by a relatively low horizon. The misty weather, the leafless trees document a colder and less colorful season, which De Pietri took advantage of for her work to achieve a visual emphasis of the seemingly exemplary motifs. The outlines of the more distant objects dissolve and merge in a light, foggy background.

These works by Laurenz Berges, Michael Collins and Paola De Pietri encounter one another for the first time in this exhibition. It unites their intuition and their sharp eye for temporary as well as timeless realities, for facts and gradual transformations, as well as their sensitivity for the specifically fine aesthetic that arises from it.

A leporello (German/English) will be published to accompany each of the artistic positions. Assembled in a slipcase, as artistic publications the leporellos have been designed to acquire collector”s value. (Snoeck Verlag, Cologne; graphic design: Claudia Ott, Düsseldorf)

Concurrently in Room 2:
A Look at the Collection: Landscape – Transformation – Space

With this presentation accompanying the main exhibition, Die Photographische Sammlung/SK Stiftung Kultur presents historical and contemporary works that once more intensify the artistic examination of the subject matter. Focus is placed on three selected works that were transferred from the holdings of the Stiftung Kunst im Landesbesitz, North Rhine-Westphalia, represented by the Kunstsammlung NRW, to Die Photographische Sammlung as permanent loans in 2017. These works by Boris Becker, Elger Esser, und Candida Höfer are now being thematically and formally related with positions from our own collection by Lawrence Beck, Lee Friedlander and Pierre Bonnard, and Albert Renger-Patzsch in a group exhibition.

These will be joined by conceptually related works by Albert Renger-Patzsch, Burkhard Jüttner, and Klaus Rinke from the LVR-LandesMuseum Bonn. The presentation also explores the alternative ways of depicting the landscape that exemplify humankind”s access to nature as well as the relationship between subject and conceptual realization.

Room 3:
A Look at the Collection: Paul Dobe: Photographic Studies of Nature and the Finding of Forms

Die Photographische Sammlung/SK Stiftung Kultur contains a comprehensive collection of prints, negatives, slides, graphic motifs, and further documents by Paul Dobe (1880-1965). A trained draftsman, in his oeuvre he concentrated on studying nature, turning his attention toward flowers and plant structures. He may have possibly met Karl Blossfeldt in 1905 during his studies at the teaching institute of the Museum of Applied Arts in Berlin, where Blossfeldt taught “plant modeling”.

The black-and-white photographs by Paul Dobe feature flowers and trees as well as photographic reproductions of his drawings. Taken with great precision, the images have been carefully mounted and labeled: with quasi-scientific aspiration and against a botanical background, Dobe sought principles of construction, a law of form based in nature. Dobe devoted himself to the photographic portrayal of different cloud formations with similar impetus. These images are also included in the exhibition. In addition, the photographic sheets that pursue the idea of the principles of order taken from nature in an abstract way and ultimately condense into the new creation of pure forms have a surprising impact.

The press images in conjunction with the exhibitions can be downloaded directly from http://bit.ly/2mSBVzZ

With its collection, the scholarly maintenance of its holdings, its research projects, and its exhibitions, all of which center around objective, documentary photography, Die Photographische Sammlung / SK Stiftung Kultur contributes to a wide range of regional, national, and international artistic and cultural offerings.The institution”s collection comprises more than 30,000 works by historical and contemporary photographers of various nationalities. A significant share of these-more than 10,500 negatives and 5,500 original prints-is part of the August Sander Archive, followed by negatives and prints from important series by the artist couple Bernd and Hilla Becher. These two photographic stances, are since 1992 and 1996, in terms of style and content decisive for the further development of the collection.
There are two to three exhibitions a year, most of them accomponied by publications compiled at Die Photographische Sammlung / SK Stiftung Kultur. Presentations are organized that are assembled from the institution”s own collection as well as displays of works that enter into a dialogue with it. The exchange with regional, national, and international institutions plays an important role, as evidenced by numerous collaborative exhibition projects and a lively circulation of loans.